For EAST ENDERS, I travelled to Estonia, Lithuania & Latvia in search of imagined impressions. During this expo, they present this new work for the first time. It is a series in search of the story beyond the narrative.


"Koen Broos is all about showing us the world as it is when we are not looking; when we fold our eyelashes in front of our pupils and knead the outside world through a narrow cavern without touching it. That we look away flat-eyed and therefore see better; think we see better or want to see better what we desire. That our slanted eye corners and our dampened retinas will tell us more than a high-resolution scan of the world in microscopic pixels.  That we may suspect what is, has just been or is yet to come. That you never know for sure what is before you before you have un-seen it. Likewise, the Estonian poet Jaan Kaplinksi doubts what is now east and west, where he is now again, in this second or in over there room, and which pixels and shadows suggest something of a border or an enclave."
Gerry the mol 2022

EAST ENDERS translates the thematics of transition and imaging to so-called Eastern Europe. Or should we stick to former Eastern Europe, given that there is only one Europe?

Historically, we could say that Eastern Europe disappeared under the bricks of the Berlin Wall. One night literally hammer and chisel and East and West had become non-utilitarian concepts. Or, it seemed so anyway. For a decade, cultural-historical differences were eagerly absorbed into European expansion and there seemed little offense. On the contrary, during the first decade of the 21st century, European internal evolution was completely overshadowed by global terror and war. From 2010, with the financial crisis, the gaze was turned back inside Europe, but then the schism turned out to be north-south rather than east-west oriented. The Greek financial crisis, the dire Italian crisis and, in the slipstream, suspicion against Portugal and Spain put the split on edge: the austere north versus the south, areas of impoverishment, fraud and profligacy. But an old scar remains a scar. Pretty soon, in the 2010-2020 period, east-west issues resurfaced: Hungary, Poland, Slovakia, Belarus and now, as a sad climax, Ukraine.

EAST ENDERS is thus about TRANSITION and about the fixed image.

afterwards Tuesday to Saterday from 1 to 5 p.m. Hasselt cultural centre, Kunstlaan 5, B-3500 Hasselt 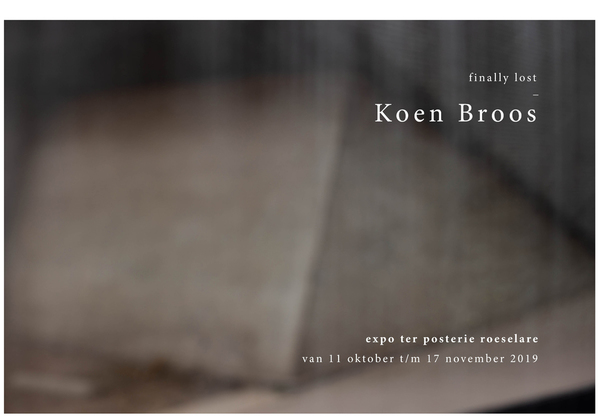 ‘Letting go of all that you already know. Looking differently without knowing where it ends’ '

This series is different. A logical continuation for me. A search for more complex images with more layers. A traditional first impression. Monochrome colours, a strong presence of colouring. Light that makes the images vibrate. Until you take a closer look. I love showing that things are not unambiguous. Images show nuances, can be radical sometimes, take hold of you and suck you in. Finally lost! Letting go of all that you already know. Looking differently without knowing where it ends.' Koen Broos

Koen Broos (1972) is De Spil's in-house photographer this season. He exhibits his series 'finally lost / series 7' in Ter Posterie in Roeselare. A selection of photographs he made during his many quests in Belgium and abroad. The real topic is light. The darker the pictures, the clearer this becomes. Koen Broos does not show what you are used to see, but he tries to find the tension. His camera forces him to look at reality differently. As the viewer, the artist searches for something to hold on to.

Ter Posterie becomes a space where you can weigh up the inner world of Koen Broos with your own thoughts and emotions. An expo as a journey in the subconscious. Images are posted on a large billboard outside De Spil during the entire season. Koen Broos has specifically made these images for - and in - De Spil. A new picture will appear every month. 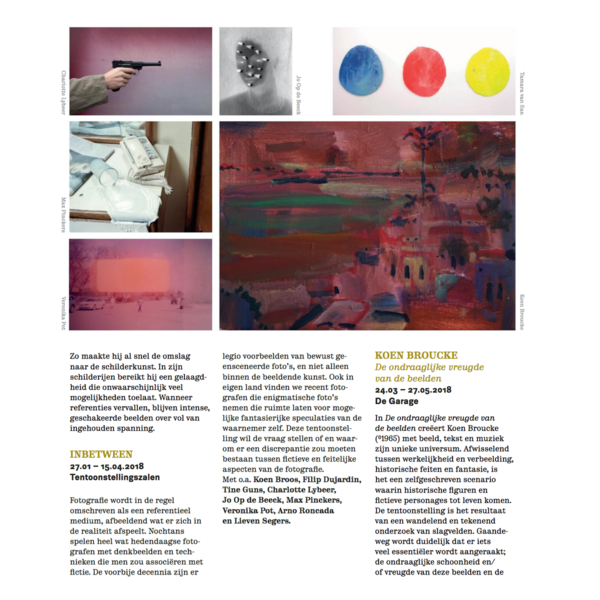